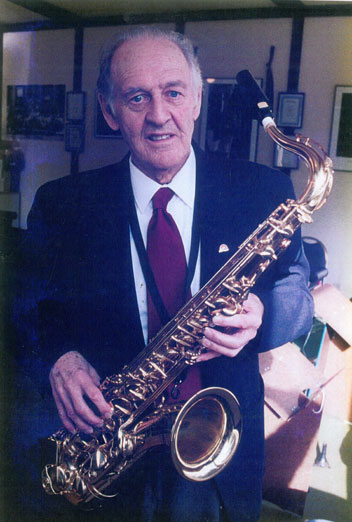 Larry Homer, Founder of the Moonliters

The Valley Society for the Advancement and Preservation of the Music of the Big Bands, otherwise known as "The Moonliters Big Band", began in late 1971 when a few amateur Big Band lovers began jam sessions. By the fall of 1972, seven of these devotees staged an Old Fashioned Box Social and Dance at the Hole in the Wall, a private club near Abbotsford. As interest grew, so did the band - in both scope and size.

By 1975, membership had reached 17, and the quest for that "Big Band" sound was on! Fortunately, public interest was bringing about a revival of the music from the "Swing Era", and tunes popularized by The Dorsey Brothers, Glenn Miller, Benny Goodman, Count Basie, Duke Ellington and others were being heard more often.

Although centered in Abbotsford, the band has members from Bellingham and Sumas, Washington, as well as Chilliwack, Langley, Coquitlam, and Abbotsford. The dedication of these "preservationists" is perhaps best revealed by the fact that no member of The Moonliters receives any remuneration other than out-of-pocket expenses. Money received by the band for performances goes toward equipment repairs, music scores, promotion, and the paying of substitute players as required, if a volunteer member has to miss an engagement.

From 1971 until 2005, The Moonliters were guided by their founder, Larry Homer, of Abbotsford. Larry passed away in November 2005, but his band continues to perform the music he loved with some of the original members still taking part.

The Moonliters sincerely hope that you enjoy their music which now includes some Latin and more recent popular tunes, in addition to the Big Band favourites from the “Swing Era”. At each performance, your applause is our reward for what has truly become a labor of love.